A Persian Summer with David Rizbaf 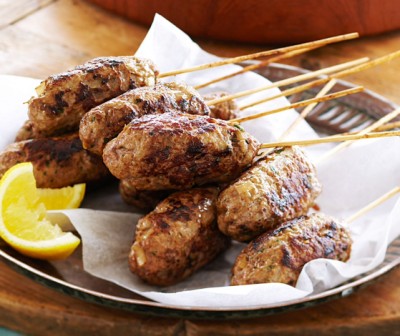 David is a chef with a background and passion for Persian cuisine. David has worked in London as a chef and joined our Mistley Thorn team in 2017. He comes from an Iranian Persian background on his father’s side and has developed a passion for encouraging the popularity and awareness of Persian cuisine, what it is and how delicious it can be.

David’s father Mohsen Rizbaf was born in Tabriz in the north of Iran and moved to the UK when he was 15. After settling here and starting a family, he would cook his traditional Persian cuisine for David and his brother to pass on some of the traditional dishes.  As David got older, he and his father would work together to try and perfect the dishes to be as good as he remembers his mother cooking them back in Iran.  David will share with you the delights of this little known cuisine.

Come and taste the delightfully fresh flavours from the East.

The menu will consist of a variety of delicious Persian Kebabs and Skewers, traditional salads and accompaniments with steamed Persian Thadig rice.

The workshop will conclude with a Persian Feast served with wine.